My Grandfather and I were very close. His sudden death in the middle of the night in my childhood was like losing a parent.
FACTS MATTER: It should not be the case — that when I create art — about my family history — I am attacked — with — dumb — bigoted — jewish princess slander — that slander has — in fact — caused life endangerment to me — and severe trauma to my family. Herbert Cohen was not rich — but he was great — inspiring — a true leader — and also loving — my family is so fortunate — that he was a part of our lives. Also — he died in 1970 — so my grandfather — never directly helped me — to accomplish anything — but the love and encouragement — he gave me — before he died — is always present and forever.

Herbert Cohen became famous in 1929 — at age 29 — as the Public Defender in the HEX Murder Trial. Books and plays have been written about the HEX Trial. This is the New York Daily News on April 7th, 1929. In real life — Herbert Cohen had pale blue eyes.

At 32, Herbert Cohen, a Democrat, was elected to the Pennsylvania State Legislature. He then became Majority Floor Leader for multiple terms. This is the Philadelphia Inquirer's coverage on Sunday, November 20th, 1932. 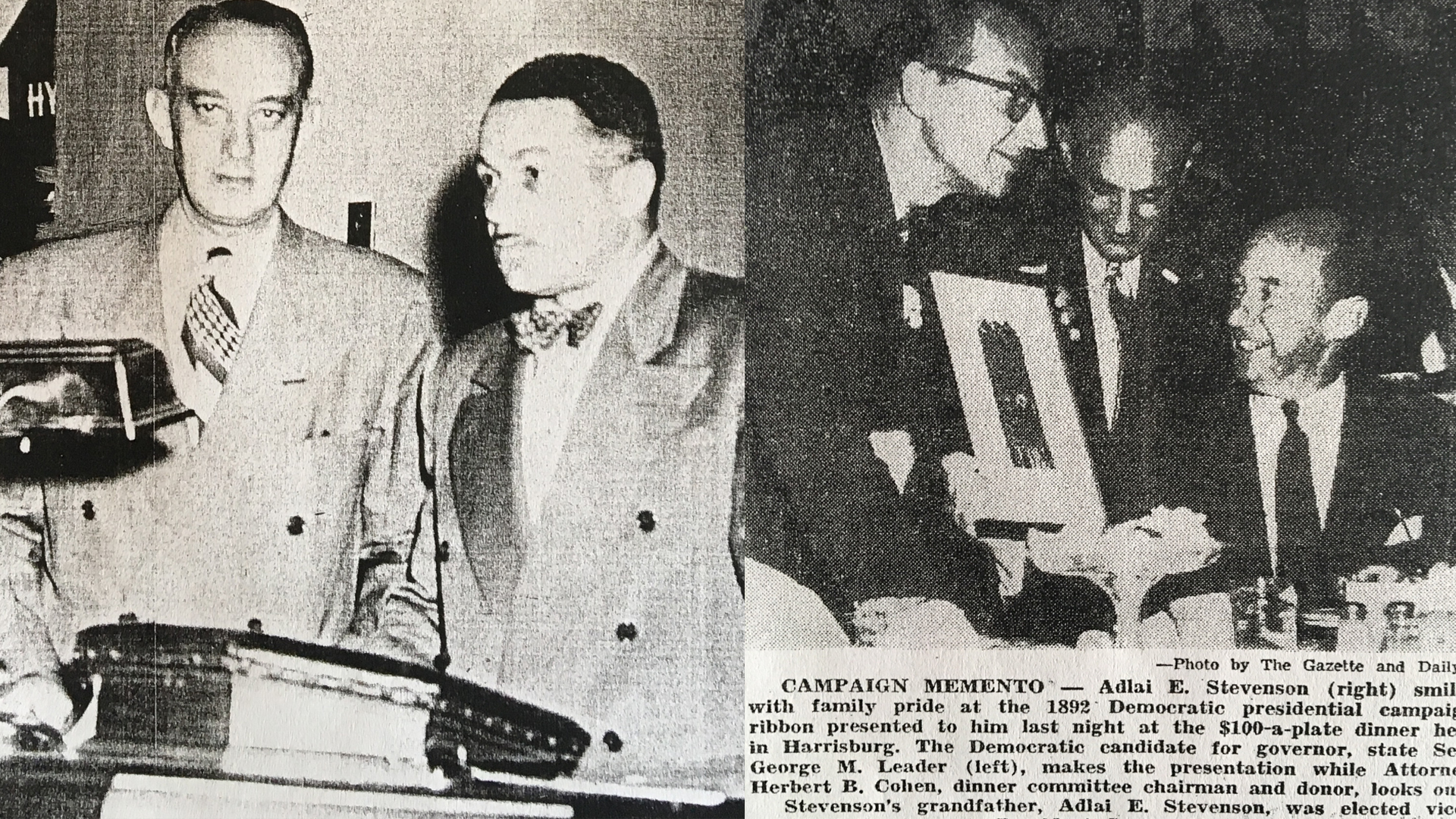 Herbert Cohen was at the forefront of civil rights progress long before the civil rights movement of the 1960s. On the left is a photo of Herbert Cohen in 1947, campaigning with African American PA Congressional Candidate Joe Rainey Jr., who was running on the Progressive Ticket. In racist, anti-Semitic York County, PA, both my Grandfather and Joe Rainey Jr. were putting their lives on the line. 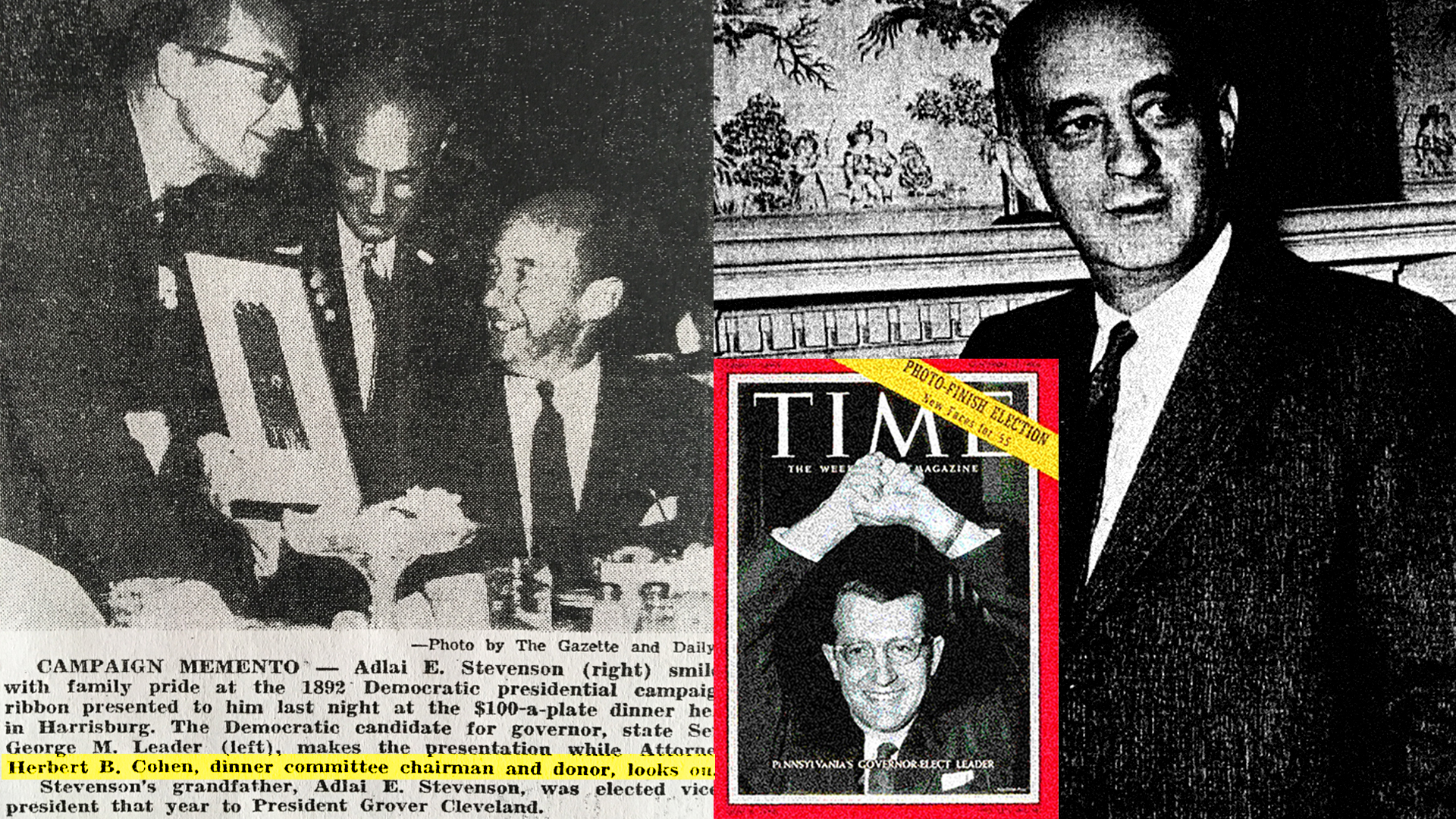 Herbert Cohen was widely viewed as the the Leader of the Democratic Party in Pennsylvania and the real political power in the state, while also being respected for his integrity.


Anti-Semitism in mainstream American politics and publishing has always gone on.
Herbert Cohen — whom many viewed as the real power in Pennsylvania Politics — was described as the architect of the Democrats return to power in the state.

Herbert Cohen was described as being presidential.

Herbert Cohen was viewed by George, himself, as his political mentor and closest ally.

Herbert Cohen should have been on the cover of Time Magazine with George.

Instead — Herbert Cohen — a ground-breaking Jewish-American Leader — was not even mentioned in the article.

After George's election, Herbert Cohen was his first cabinet pick as Pennsylvania Attorney General. (News article to be added).

He later became Justice Cohen, a judge on the Pennsylvania Supreme Court. (News article to be added).


Herbert Cohen was respected by Democrats and Republicans for his lifelong integrity, unbiased defense of constitutional rights, originality, and generosity.

Herbert Cohen — the son of Jewish immigrants — who grew up in anti-Semitic York County, PA — overcome that bigotry to become a popular political powerhouse in Pennsylvania — and nationally.

Locally — Herbert Cohen originated the concept of "Downtown York" to revitalize York's inner city — and along with my parents, Harry Jay Rubin and Margaret Cohen Rubin, and my Uncle Donn Cohen and Aunt Janet Cohen, my Grandfather and family significantly contributed to civil rights, education, and to lifting up those living in poverty in York, PA.

Herbert Cohen was a Self-made Man, an American Capitalist and Liberal Reformer, and a Respected Leader, but he was not rich.

Herbert Cohen did not prioritize the accumulation of wealth.